In 17th century England, Bills of Mortality identified the sixth leading cause of death as “teeth.” Although deaths from abscesses and other dental infirmities – and their oral/systemic effects – are seemingly rare today, it is difficult to comprehend that only a few hundred years ago, “teeth” were a leading cause of death.

Or might something similar be happening today, only to be disregarded?

“Teeth” continued to be commonly listed in those Bills of Mortality up until the mid-1800s. Examining the historic facts of this period, it is apparent that the number of deaths attributed to “teeth” is probably fairly accurate. It took antibiotics and discovery of the biophysiological concept of asepsis (free of pathogens) to bring about the mid-20th century’s dramatic reduction in dental deaths.

From prehistoric through Medieval times, many dentitions remained largely intact after the average human lifespan, which was just 20 to 30 years at the time. Neither dental caries (tooth infection) nor periodontal disease (gum infection) played much of a role in these ancestors’ demise, due – understandably – to their more natural diet (no Coke or candy machines back then). It’s unlikely that these populations suffered many severe tooth troubles.

It is a phenomenon thoroughly documented by Weston Price in his 20th century studies of indigenous populations, available today as Nutrition and Physical Degeneration. It is documented, as well, in historical records at Honolulu’s Bishop Museum regarding Hawai’ian people in approximately 1200 CE.

Changes in dietary habits since the late 17th and early 18th century – most notably, the introduction of refined sugar – radically altered the prevalence of dental diseases.

Today, toothaches are nothing unusual. The common solution is root canal treatment. An individual seeking help from their dentist is apt to be given a referral to an endodontist for the procedure. This referral will lead one to the fate of what I call “Dentists’ Disease” – a natural outcome of misguided folly and self-induced destruction.

It may surprise you to learn that even 100 years ago, such referrals were uncommon. In fact, endodontics was not even recognized as a dental specialty by the American Dental Association until 1963 – a mere 58 years ago.

Yet prior to this, it had been understood that root canal teeth become harbors of hidden infection, indetectable due to all the nerves and other living tissue having been removed from those teeth. For instance, in April 1919, BB Machat, DDS, presented his work on “The Significance of Pulpless Teeth in Health and Disease.” Two years later, Alonzo Nodine, DDS, presented a summation of the dental and medical consensus (including the views of Charles Mayo, MD, of Mayo Clinic fame), “The Surgical Eradication of Focal Infection in the Jaws Under Local Anesthesia.” (“Focal infection” signifies an infection that has effects far from the original point of infection – in this case, infected root canal teeth.)

It was well known – and common sense – that dental infections were associated with eye, ear, nose, neck, and brain issues, along with general systemic blood dyscrasias (blood poisonings) of the whole physical body. As then, so today!

And these – Machat and Nodine – are just two dentists among thousands conveying the wisdom of that time, often through the Dental Cosmos, the yearly journal of the dental profession from roughly 1857 to 1936, at which point the American Dental Association moved into a position of dominance.

Even the so-called Father of Modern Endodontics, Louis I. Grossman, DDS, wrote about the significance of oral focal infections impacting general health and the requisite sterilization of dead teeth. Publishing in the 1925 Dental Cosmos (“Focal Infection and Its Oral Significance,” pp. 1150-55), Grossman added greatly to the understanding of fundamental biophysiologic processes in our profession.

This, along with Grossman’s comments in the first edition of his 1940 text Endodontic Practice, give a good sense of the historical shift away from true physiology and the distinction “oral sepsis” – Oral Systemic Toxemia – and toward the justification of so-called “modern root canal therapy” as license for leaving gangrenous infected tissues in sterile human jawbones, disregarding essential human biophysiology; a policy and practice of managing infections in teeth with drugs rather than ending infections with sterilizing treatments as directed by Grossman. 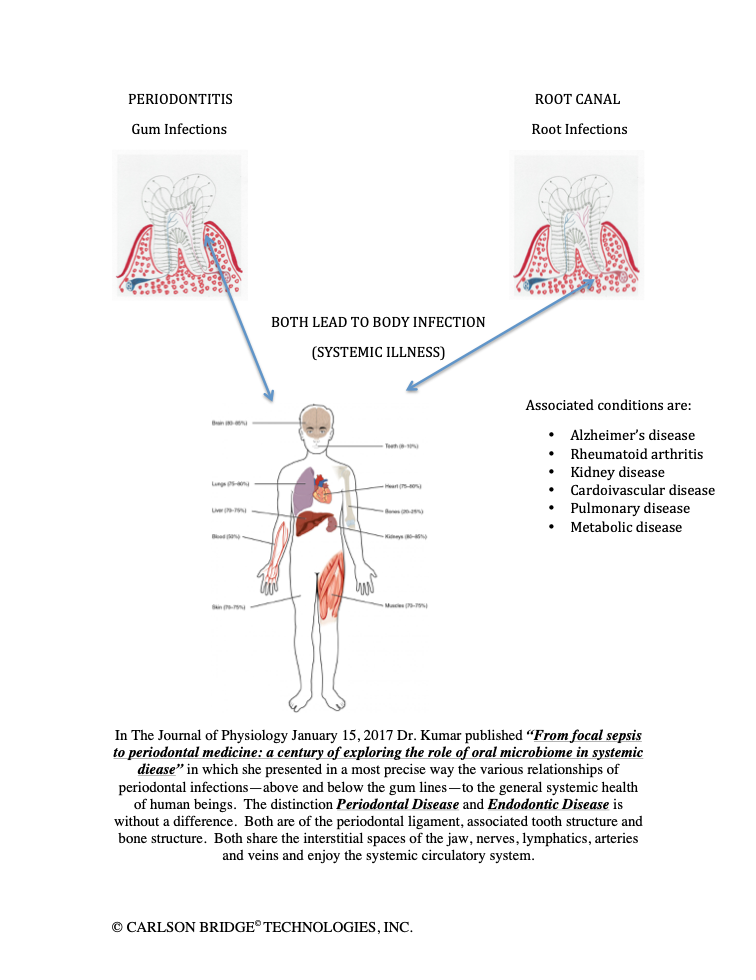 From Death by Root Canal, available through Amazon

I encourage you to read my book Death by Root Canal, as it is based on 38 years of research by board certified pathologists, demonstrating the infected bone and associated structures below, in, and around root canal teeth, as well as dental implants. The results were conclusive, showing

The presence of microorganisms in sterile tissue spaces is a marker for the normal process of tissue degradation and dissolution of the foreign object – an inevitability with infected root canal teeth and titanium dental implants. Here are the natural stages of the fate of dead bodies and teeth on the other side of what we call living:

That said, I do not write this to focus on death but enhanced Life – and a wish to set the record straight. I wish to correct the deviation, misrepresentation, and deception set in place long ago by the “cult of dental death” and its myopic view of root canals.

Seeking better outcomes than the dental orthodoxy has delivered, I propose a branch of health treatment we will call Homeo-Physicum©. “Homo” means man or woman. “Physicum” means purging or cleansing, a scraping away of debris. In this realm, the removal or drawing out of the dead dental organ, the gangrenous odonton (tooth), is requisite.

One may turn to any number of issues: dead tooth (root canal tooth), dead implant, dead fluoride, dead mercury filling, dead gold filling, dead non-precious metal crown, and so on. In every case, the treatment for True Health is Homeo-Physicum©.

You can find a practitioner providing such care through one of three key associations for biological dentistry: the International Academy of Biological Dentistry & Medicine (IABDM), the International Academy of Oral Medicine & Toxicology (IAOMT), and the Holistic Dental Association (HDA). Or you can reach out to me directly. I’ve been around the block a few times now in my 55 years of practice, and I’ve yet more to offer. May I be of help to you?

Ronald S. Carlson graduated from the University of Michigan School of Dentistry in 1969 and completed postgraduate training in pediatric dentistry with Strong-Carter Dental Clinic in Honolulu immediately after. He was a founder of Kokua Kalihi Valley Dental Clinic in 1973 and volunteered there until 1980, serving low income families and immigrants from the South Pacific Islands and Asia. He has maintained a private practice in Honolulu since 1971, emphasizing biological dentistry. He can be reached at (808) 735-0282, ddscarlson@hawaiiantel.net, or carlsonbridgetech.com.