Root Canaled Teeth & Gangrene: What Do They Have in Common?

This paper originally appeared in the January 2019 issue of the Scientific Archives of Dental Sciences (Volume 2, Issue 1).

When I first heard the word “gangrene,” I would not have thought that it would be referring to a root canaled tooth.

What part of the body can have gangrene without serious health effects?

As it turns out, it is not healthy to have any part of our body that has gangrene surviving within it.

Here’s an analogy to think about:

Would that not be considered gangrene?

What happens when gangrene is left untreated?

Gangrene is a condition that occurs when body tissue dies. It is caused by a loss of blood supply due to an underlying illness, injury, and/or infection. Fingers, toes, and limbs are most often affected, but gangrene can also occur inside the body, damaging organs and muscles. (1)

Gangrene left untreated can spread throughout your body, causing a variety of symptoms and diseases.

A root canaled tooth does produce a sealed tooth for a very brief period of time. The remaining fluid/bacteria from the nerve tissue will continue to build pressure within the tooth. This will eventually produce exotoxins that will damage the apex of the tooth, leak into the periodontal ligament and damage the alveolar bone that supports the tooth. Once a root canal is performed for your patient, they will now have a compromised immune system.

Would that be considered healthy?

Of course not, but in most dental offices we consider a tooth that has had the nerve tissue removed and the canals filled with an inert rubber material (called gutta percha) a “non-vital tooth or a healthy tooth.” Actually, the tooth is dead.

In dentistry we perform root canals on a daily basis. There are more than 60 million root canals performed every year in the USA.

Dentistry is in the business of saving teeth but at what cost are we performing these procedures on a person?

The word “endodontic” comes from two Greek words meaning “inside” and “tooth.”

noun (used with a singular verb)
1. The branch of dentistry dealing with the cause, diagnosis, prevention, and treatment of diseases of the dental pulp, usually by removal of the nerve and other tissue of the pulp cavity and its replacement with suitable filling material; pulp canal therapy; root canal therapy.(2)

The American Association of Endodontists was formed in 1943 by a small group of dentists. It was believed that if you irrigate the canals with sodium hypochlorite and peroxide, the tooth would become sterile. It wasn’t until 1963 that the ADA recognized endodontics as a specialty.

Drs. Weston Price, George Meinig, and Hal Huggins all completed extensive research on the dangers of root canals. Their conclusions were all the same. Once the nerve of the tooth dies, the tooth should be removed. Once a root canal is performed, toxins from the residual bacteria (that are able to survive inside the dental tubules) have the ability to create a “time bomb” with that person’s immune system. The body cannot withstand a focal point infection for long periods of time.

A root canaled tooth is able to create a subclinical infection, meaning that there are no signs or symptoms of infection.

Dr. Price was the chairman of the research section of the American Dental Association from 1914 to 1943. During this time, Dr. Price conducted extensive research of how destructive root canals can be. Dr. Price’s research was ignored by orthodox dental organizations for over 50 years. Only now is Dr. Price’s research is gaining acceptance within biological/holistic communities.

We know each tooth is filled with dental tubules. Dr. Price discovered that if you measured dental tubules of a central incisor in a straight line it would be 3 miles in length. How can three miles of dental tubules be sterilized? As it turns out, you cannot sterilize one hundred percent of the dental tubules. Once the blood supply is cut off from the body, microscopic bacteria are able to survive in these tubules/tunnels where they continue to multiply.

Dr. Weston Price discovered that there are as many as seven separate accessory canals in a single central incisor. Microscopic organisms regularly move in and around these tubulegophers in an underground tunnel.(3) 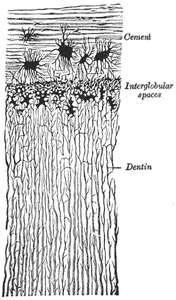 Based on the research by Dr. Price, Drs. Meinig and Huggins, once a root canal has been performed, we know that the tooth still harbors microscopic bacteria. The blood supply and oxygen source has been shut down. Now the microscopic bacteria have the opportunity to mutate into toxic pathogens. This type of infection can spread to the apex of the tooth and continually infect the jawbone.

This sets the stage for suppressed immune system.

This type of infection is usually safe from your own body’s immune defenses and from antibiotics.

Our immune systems are designed to protect us. When our immune system is taxed for a long period of time, disease usually manifests itself in one form or another. This is one of the reasons why some people with a root canal tooth can remain healthy when others can become quite sick. Our immune systems need to be fully functioning majority of the time.

Dr. Price found “that those people who had no history of degenerative diseases usually had strong immune systems which were capable of engulfing any bacteria present and prevented them from becoming sick. However, Price found that if these same people suffered a severe accident, a bad case of the flu or some serious stress problem, their immune systems that had been protecting them would become so compromised that they would then become ill with a degenerative disease.” (4)

Dr. Price conducted tests on rabbits using a piece of an extracted root canaled tooth. He would insert a piece of the root under the skin of the rabbits. His test results discovered that root canal fragments from a person who has suffered a heart attack, when implanted into a rabbit, would cause heart attack in the rabbit within a few weeks. Transference of heart disease could be accomplished 100 percent of the time.(5)

In a continuation of Dr. Price’s work, the Toxic Element Research Foundation (TERF) used DNA analysis to examine root-canaled teeth, and they found bacterial contamination in 100 percent of the samples tested. They identified 42 different species of anaerobic bacteria in 43 root canal samples. In cavitations, 67 different bacteria were identified among the 85 samples tested, with individual samples housing between 19 to 53 types of bacteria each. The bacteria they found included the following types:

TERF believes it is no coincidence that in the US root canals have been found to abound in people with Multiple sclerosis, Lou Gehrig’s disease, Lupus, leukemia, diabetes, arthritis, and a host of other autoimmune diseases. (7)

Dr. Meinig became one of the founding members of the American Association of Endodontists in 1943. Dr. Meinig spent 18 months delving into Dr. Price’s research and discovered just how toxic root canals can really be. Dr. Meinig wrote a book that deals with these issues. The book Root Canal Cover-up was written in 1993.

Dr. Huggins has both a dentistry degree and a master’s degree in immunology, plus over 40 years of research and experience in holistic dentistry. Dr. Huggins is an expert in blood chemistry and cellular chemistry.(8)

Dr. Huggins was able to utilize specific scientific tools to analyze the bacteria hidden in a root canaled tooth. His research was completed in a laboratory, Dental DNA. He discovered that anaerobic bacteria were found in almost every extracted root canaled tooth he examined. From these analyses he discovered that the bacteria would continue to grow into the tooth sockets and periodontal ligament, and migrate throughout the body. DNA analysis is able to identify bacteria, dead or alive, from the signatures of the revealing DNA. Anaerobic bacteria is living in root canals. Twenty-eight percent of the people have diphtheria bacteria in their root canals. This can lead to chronic fatigue. A root canal tooth is a breeding ground of bacteria. (9)

Dr. Josef Issels of Germany was a physician wjp developed a cancer therapy that promoted an alternative treatment regime instead of the typical mainstream treatment for cancer.

Dr. Issels found that in his 40 years of treating “terminal” cancer patients, 97 percent of his cancer patients had root canals. He would not initiate his successful treatments until all root canals had been removed. (10)

Think of the meridians as a major highway. When one lane gets blocked, it slows traffic, but if a serious accident happens and blocks all traffic lanes, all traffic is stopped until the accident is cleared up. Root canals can affect our body in a similar way. Does the root canal you have block one lane of a six-lane highway or is the six-lane highway completely shut down?

One thing is clear.

When there is a loss of blood supply to any part of our bodies, particularly the jawbone in this case, the patient may suffer a variety of illness and or diseases for many years without knowing the direct cause of their problem.

So why do we believe that a root canaled tooth is healthy?

← Previous: Septic Tank Teeth (abridged) Next: Root Canal Treatment: How Much Good Health Do You Have to Give Away? →