Evidence of Harm chronicles the lives of three ordinary Americans who become reluctant health advocates after suffering from the devastating effects of hazardous mercury vapors generated during routine dental procedures.

Evidence of Harm chronicles the lives of three ordinary Americans who become reluctant health advocates after suffering from the devastating effects of hazardous mercury vapors generated during routine dental procedures. The film presents a haunting portrait of a dental industry all too willing to turn a blind eye to science while placing profits and politics ahead of the 120 million Americans currently implanted with toxic amalgam dental fillings.

Filmmaker Randall Moore began researching Alzheimer’s disease after his father was diagnosed with the disease. Finding out that the “silver” dental fillings in his dad’s mouth contained 50% elemental mercury and were constantly releasing toxic mercury vapors above established safety levels, he began working diligently as a mercury documentarian. 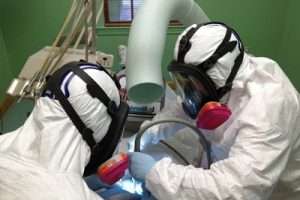 “During my research I repeatedly discovered that our government regulatory bodies have failed to protect the public from this toxic product,” said Moore. “After watching scientists present information to the FDA that links mercury to Alzheimer’s disease, I became frustrated with our government’s refusal to do anything about removing this toxic product from the marketplace. So, I took it upon myself to make a documentary that would alert others of the widespread danger, which hazardously impacts public health and the environment worldwide.”

Moore came to understand how amalgam dental fillings, all of which contain mercury, could create a national epidemic of poisoned individuals that slip through our healthcare system. “Government reviews of mercury have found it can create nearly 40 adverse health symptoms including memory loss, emotional distress, chronic fatigue, anxiety and depression. Most doctors and patients don’t know of these exposures or the adverse health outcomes that are a result of mercury poisoning. Neurological problems, cardiovascular disease, stroke and kidney dysfunction all have well-established links to mercury,” stated Moore.

I wanted to give Xanax a bad review. When I first started taking it, I barely felt any different. If anything, I went from being numb, to being sad. But then I had a day unlike any other since maybe 2016.
I was lying in bed, like I usually do after class, when I realized I was bored. I was bored and I wanted to play video games. I didn’t realize until a week later that it had been a long while since I had just wanted something.

Moore found the issue was even worse than what he imagined. “Because dentists are not aware of the toxic levels of mercury released during the placement, polishing and removal of amalgam fillings, they do not know to protect themselves and are unaware of occupational safety regulations requiring them to inform and protect their staff from toxic exposures,” said Moore.

Via media release from Do No Harm, LLC

← Previous: The Tooth/Body Connection Comes to VoiceAmerica Next: "Mercury in Existing Dental Fillings Is No Problem" →