The following article was written by Guylaine Lecours, RDHEF, in completion of requirements to become an IABDM Certified Biological Hygienist. Congratulations, Guylaine!

Learn more about our certification programs.

In biological dentistry, we strongly believe that fluoride should not be incorporated, neither in a professional dental practice, nor in our daily lives. Fluoride has been researched by many countries for an extended period of time, and research has largely determined that it is toxic for general health when ingested regularly.  While initial studies believed fluoride in daily use and as a toothpaste additive provided a benefit of protecting and strengthening teeth against cavities, recent studies have not been able to prove this link.

Many European countries have chosen not to add fluoride to their water supply, resulting in 97% of their population ingesting non-fluorinated water.  Outside of Europe, most developed nations also do not fluoridate their drinking water. In the United States, however, most cities still add fluoride to their tap water, despite studies proving its negative health impact.  Since health authorities in North America continue to perpetuate the false notion of fluoride’s positive benefits and refuse to let go of the fluoridation paradigm, over 240 communities are choosing to reject the use of fluoride in their water. Major opt-out cities in Canada include Calgary, Montreal, Vancouver and my hometown of Trois-Rivieres, Quebec; and examples in the US include Portland, Oregon; Wichita, Kansas; Bucks County Pennsylvania; Rock Springs, Wisconsin; and Gridley, California.

When researchers compared the rate of tooth decay in countries with and without fluoridated water over the last 50 years, the most compelling discovery is no difference of the rate of tooth decay between the two groups, which at a minimum confirms the use of Fluoride in water and dental practice has no positive impact. To support this, the World Health Organization (WHO) conducted a specialized trend study on 12-year olds and their decayed, missing, or filled teeth (DMFT). It compared western countries with and without water (salt) fluoridation, including the United States.  The charts below indicate the results of the study. 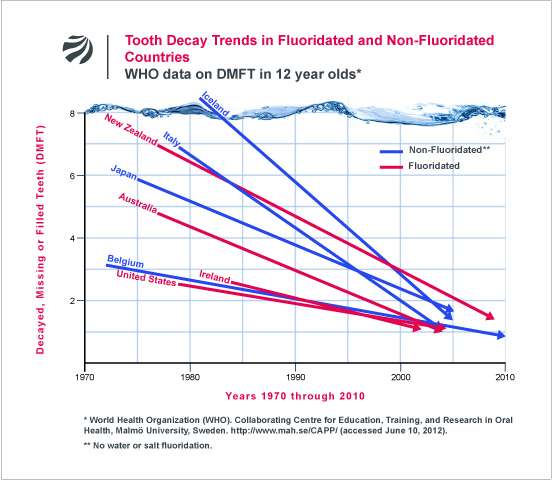 The study demonstrates tooth decay rates have declined at the same rate in non-fluoridating countries as the United States. And although a 20-year study by the Centers for Disease Control and Prevention (CDC) shows a decline in tooth decay when fluoridation was used, the WHO results prove countries drinking non-fluoridated water had the same rate of decay. Therefore, while one might (incorrectly) conclude from the CDC study that fluoride was the cause of declining tooth decay rate observed, the WHO study establishes that fluoride was not the determining factor.

From the above, we have established that fluoride does not have a positive impact in comparison to the avoidance of fluoride. But it is equally as important to consider the negative health impact of regular use and ingestion of fluoride.  When ingested in unsafe amounts, fluoride can lead to multiple health issues, such as

Let’s elaborate on two of these findings by looking more closely at the research.

Bone disease caused by too much fluoride is called skeletal fluorosis, which leads to chronic joint pain and stiffness. It can cause symptoms and degenerative changes that can resemble osteoarthritis. Recent research strongly suggests that fluoride can cause bone changes of fluorosis before it becomes evident on x-ray, therefore making it very difficult to diagnose in a timely or accurate manner.

Fluorosis is a defect of the enamel, an increase in porosity, also called hypomineralisation. Common causes are fluoridated drinking water, ingestion of fluoride toothpaste, use of fluoride tablets, and consumption of processed foods made with fluoridated water.  Negative effects are exacerbated if the above examples are prevalent within the first eight years of life, particularly during infancy.

We have established that fluoride not only is not beneficial but could also be a harm. Therefore, how can we protect ourselves against the use of fluoride in our water source? One solution is water filters. Filters using reverse osmosis, either attached to plumbing under the sink or pitchers that filter the water once dispensed, can eliminate up to 99% of fluoride.

While we have to take socioeconomics and access to dental care for certain populations into consideration, research has shown no difference in tooth decay between fluoridated and non-fluoridated countries. In addition, cavities do not increase when fluoridation stops. And it also does not prevent from oral health crisis in low income areas.

Education with a multifaceted approach is the best route for successful oral hygiene and good general health.  Patients need to properly care for their teeth at home, seek regular professional care to avoid gum disease, adopt an organic diet, and avoid toxic ingredients in their daily nutritional intake.  By incorporating these practices, patients can also benefit from a reduced risk of other non-dental health related issues, like diabetes, elevated blood pressure, heart disease, etc.

To summarize, neither fluoridated water, fluoride in toothpaste, nor topical fluoride treatment used on children have a positive impact on cavity prevention. Investing in education and providing patients information on how to control plaque retention and adopt a healthy diet will render far better results for the oral health of this generation.